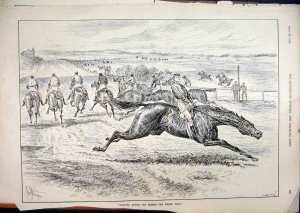 His horse won every single race. Every single one. It’s unheard of. She hacked up. That means she won easily. Hacked up.

And the bizarre thing was he rode it. Him. And it was a small filly.

What’s he feeding it? That’s all we wanted to know.

Must be steroids, must be. Said Martin Gough. We agreed.

A lot of money was at stake.

The pony was called The Spirit of India. He didn’t look like the kind of chap who’d been to India.

It was agreed that we should consider looking into it.

Where did he keep it? And for god’s sake what did he feed it?

Everyone was relieved when Mrs. Snaith died. That sounds awful. But no one likes to see someone suffer. It was dementia. We all…

She was alone. Husband long dead. Children far too busy… Children of their own, no doubt. Joseph Petty used to do her lawn for free on a monthly, but it all got too much. He was losing business.

We guessed Alzheimer’s. But her children paid for some fancy diagnosis. So they didn’t have to sell the house. Put it towards some care facility somewhere.

No one likes to watch bad things happen. No one wants to feel complicit in…

But you don’t sell houses around here. Not if you can help it. Ours is a beautiful neighbourhood. It’s a destination neighbourhood, it’s not the kind of place you just land. It takes a long time to arrive at a place like…

We couldn’t blame them.

But I mean it was a mess. By the time she’d gone it was… huge overgrown ferns. Lawn around your knees. Grime on the windows like that (indicates). Tiles falling off the roof. And the wildlife. Foxes and all sorts.

Poor Trevor and Maureen Lawrensen. Two doors down. Fretting about what it means to have a place like that within wafting distance of your own. Property market being what it is. In fact everyone on that street. It looked like a bad tooth.

We’d made lists. We always had lists of enquiries. People we trusted. Favours owed. Because of the neighbourhood, it being so desirable. We didn’t even have an estate agent in the village. Didn’t need one, with our lists.

But they had other plans. Sold it immediately, as is. Closed bids. Flipped it without even paying a visit I think. Nevertheless we were relieved. Cautiously optimistic when we saw the van pull up on a Sunday morning.

He came in and he didn’t change a thing. I mean you can imagine…absolute uproar. Furious. Not one finger did he lift.

Arthur Tweddle is the only tiler round here worth mention and he hadn’t been so much as called in for a quote.

Joseph Petty dropped his landscaping leaflets through once a week for two months. Even stapled on a 30% discount. Not a phone call. Nothing.

It just got worse. Fell to ruin.

Then word spread that he’d booked the pony in for a race. True enough, there he was. This is the first time many of us got a good look at him. New people tend to put a note in the Gazette. Host a barbecue perhaps. Not a requirement of course, just good manners.

We’re not ones to let a false start get in the way of a potentially long and fruitful relationship, so the benefit of the doubt was given.

Comical ratio, they made. Him and the Spirit of India.

His kit was old and foreign. His technique was a little awkward, the way he held himself high on the horse, as if allowing himself to be led by it. She was a beautiful bay. Small for her age, yes. But glossy. Bright black eyes. Wonderful poise. He did make a funny sight on that thing.

Then the bugger won. Truth is we were thrilled. The first time.

What did he have to teach us? What tips could he share? Where else did he run? Was she familiar with the flats at Brenbury Park? What’s her form on the jumps? Does he have other race-fit ponies? Second or third strings? Did he syndicate? This had the potential to be a wonderful new development for us.

Except we couldn’t find him to ask him.

And when he didn’t buy a round in the bar, which is customary on a win like that, we told ourselves the money would be put to better use bringing his place up to scratch.

Big project. He’s a busy man. Give him time.

And when the money didn’t go on the house. That’s when we began to voice our concerns.

Our priority would always be to make someone feel welcome. I want to get that clear. That’s what makes this a community, and not just a collection of houses. Everyone belongs.

Janet, the barmaid at the Three Barrels, watched him nurse a single measure of whisky for fifty-five minutes. Alone.

Mrs. Andrews saw him outside the Post Office. Holding a letter. Weeping. Stood, she put it, as if on a kind of threshold.

He had £8,000 of Chinese Yuan to change, according to Patrick Swash.

He’d left whole envelopes of cash at the track, as if he’d plain forgot. Maureen’s son Philip worked the bar at the time. He once found a bundle of forty thousand under a chair after hours. He handed it right back to management. He was a good boy, Philip.

He received three or four large packages a week. But took no guests.

June Scarborough who ran the deli sold him six packets of sprouting seeds and a dozen tins of minced meat.

Apparently he’d been buying a lot of candles.

And what was that music Jeremy and Linda Corcoran heard on their fenn walking route? And why had he now covered up his back windows with bin liners?

And where the hell was he keeping that pony?

Why did he always look so tired? So very tired?

And how did he keep on winning? He’d be there. Every race. He’d be the first to arrive, in the morning mist. Stroking the Spirit of India. Rubbing her jaw. Whispering to her. Touching foreheads. Pressing his nose to her flank. And winning. Always winning. Without a trainer. Without a manager. And riding the bloody thing himself.

Connections, they’re called. And he had none.

Where did he train? He didn’t, we decided. He couldn’t without us knowing. He didn’t have a private gallops and he certainly wasn’t using any of the ones we blew out at.

The Spirit of India. What did that mean? Why couldn’t he tell us what it means?

We were duty-bound to look into it. We deserved more than this.

Now maybe that’s not the modern way, but it’s our way.

Penny Melvin had a seat on the local council. It became an official item of business.

We brought in track adjudicators. Random drug tests. He was required to provide papers. Licenses. Certificates. People were losing a lot of money. Warren Chester led the charge. His practice was on the skids, we all knew. Business evaporating into thin air. He was in a bad way. Spending a little too much time at the track. No wonder he was so irate. Poor Warren.

Nothing, of course. Not so much as an unregulated bootstrap. And he never mentioned it. Never uttered a word about it. Just kept on nodding, and smiling, and winning.

It wasn’t long before the horse became a banker. Bringing undue attention to a small game. People were caught bribing the Clerk of the Scales. The horse was given a weight penalty to even the odds. Didn’t make a blind bit of difference.

Bumping became more common during races. And we were known for our clean races. You could see the frustration, right there on the flat.

Our next step, we decided to present a united voice. To reach out to him as a single body. A warm hand.

We went in the evening. A more relaxed, social atmosphere. Brought a bottle of scotch. The one Janet saw him sipping. He accepted us without a blink. Without a flinch. That small, tight smile.

He opened the bottle and passed it round, filling up any containers to hand. There were fifteen of us.

Most of his furniture was wrapped in plastic. Sacks of flour in the kitchen. Huge bags of spices. Candles stacked like breeze blocks.

He answered our questions curtly and politely, and asked none back.

He said he’d been in the service, but couldn’t name the regiment. He mentioned countries he’d visited. But no cities. He said he’d come down from Bristol, but his accent suggested otherwise. He mentioned no wife, no family. No job.

What was he living off? This is an expensive area. He must’ve paid well over the odds for Mrs. Snaith’s house. Why had he come here? And where had he come from? All the things he was paying for, he had no interest in.

And why were some of his doors locked? In his own house?

Harvey excused himself, and was gone for some time. When we heard the shout, his small smile fell away. His eyes became big black moons. We moved as one into the hallway. Harvey was screaming. Leaning against a jimmied door frame. No one asked how or why he’d broken the lock. It wasn’t on our minds at the time.

We pushed into a large dark room.

And there she was. We pushed in deeper, not trusting our eyes. Our hands reaching, groping for the animal. Clutching at its mane, its coarse hair. Holding its head to placate it.

He came in behind us, in some distress. After it was all over, after the clothes had been burnt and the house re-sold, we all remembered what he’d said.

No one can quite recall exactly what happened. Some say the pony reared back in the excitement and caught her head on the corner of a shelf. Others say he himself was holding a piece of glass and fell onto her. We never could agree.

But you keep a horse indoors. A horse. That’s an accident waiting to happen.

It was the blood that shocked us all. The amount of it. Pools and pools of it. Filling our pockets, staining our arms. Sweeping across the hardwood floor in inky black shadows. Our boots leaving purple prints in the moonlight.

We wanted to help. We’re animal lovers. We wanted to save it. Franchesca Blenheim was training to be a vet. We got carried away.

We pulled the thing limb from limb. We turned her inside out. Wrestled over her organs. Chewed on her eyeballs. Extracted her skull. We cloaked ourselves in her hide. Smashed her pelvis to shards like China. His screams only bayed us further. Feasting on it, bathing in it. The wetness and the meat. Black in the night.

Eventually we left, before the sun rose.

Maureen and Trevor moved north. Joseph headed back to the city where business was better. Martin retired and downsized. Penny stepped down from the council to focus on her allotments.

Pauline and I would’ve done the same but we’d just had our roof re-thatched. And the market being what it is an all.

A few days after, I was on my hiking trail when I saw smoke. Heavily scented. Cardamom, jasmine, pungent spice. It really was quite unexpected. I wandered over and stamped out the ashes.

He takes out a horseshoe and idly fidgets with it.

My boot hit something hard. I kicked away the dirt and found this. It’s a beauty. Forged iron, custom made. Perfectly aligned. I’ve kept hold of it.

Though I must admit it’s done me absolutely no good at all.